Honoka Takamiya (多華宮 仄, Takamiya Honoka) is the male protagonist of the story. He is a second year student and the current student council president of Tougetsu Academy.

Honoka is a handsome pale-skinned young boy with short brown hair that has few bangs hanging over his face, brownish-yellow eyes, a slender build and he has a noticeably shorter height than almost all of his male classmates and lacks muscles.

As a student, his uniform consists of white shirts with a blue tie and black trousers. At his home, he is usually seen wearing casual clothing. When needed he wears a standard witch's outfit which consists of a long, high-collared robe with a tall and pointed hat (created by Ayaka Kagari and it was purchased when Honoka and Ayaka went to the Mall and ended up being confronted by the "Star Team" Tower Witches).

Honoka is shown to be a solitary guy who always prefers to be left alone and is sometimes antisocial. In classes, he is seen sitting next to 'Princess of the school' Ayaka Kagari where he considers himself an average student with no real talents or special abilities.

He is shown to be very kindhearted in various occasions by protecting Ayaka and a small girl still knowing that he is powerless. He is very righteous and wants to help those who are being bullied as he knows what it's like to be bullied. It is one of the reasons he decides to become an apprentice of Ayaka.

Honoka is the first child of Komachi Takamiya and the elder brother of Kasumi Takamiya, but there hasn't been a lot that has been specified about his background in the manga up till now. However, it has been hinted that he has met up with Kazane Kagari and Ayaka Kagari but his memories of them were erased most likely by Mikage, the school's chemistry teacher.

It has been shown that the White Princess Evermillion has been sealed inside him. There are 5 seals in total and as of chapter 34, 3 of the seals have come undone. In the anime, only 2 are directly stated to have come undone, though the 3rd is confirmed to have eroded the battle against the End Witch Weekend.

Honoka is a student of Tougetsu Academy who sits next to Ayaka Kagari, the Princess of Tougetsu Academy and he always wondered why he and Ayaka always end up on taking same bus everyday. One day during his cleaning duty, he gets attacked by Tanpopo Kuraishi and get saved by Ayaka. She told him that she protected him because he is her princess and informs him that she will protect him openly after that incident.

Next day onward, Ayaka starts to mingle with him in public; much to other students chagrin. Later he gets attacked by Tanpopo, who gets easily defeated by Ayaka. When Tanpopo and her four comrades transfers to her class he shows concern. When he goes to school next day he finds Ayaka torturing Tanpopo and  her gang except Menowa Mei who escaped capture. Then he gets kidnapped by Menowa who injures his neck. To his surprise, the damage appears on Ayaka. Later he is saved by Ayaka again. In order to defend himself he asks Ayaka to teach him magic. After that, during holiday, he is called by Ayaka to buy magic cloths and equipment for him. During that time he is spotted by some tower witches, who try to capture him. Ayaka intervenes and defeats them. After that he is taken to meet head of workshop witches who is none other than Ayaka's mother and school chairwoman Kazane Kagari. She gives him the permission to be Ayaka's apprentice.

In school they are again attacked by Tanpopo and her gang and get defeated in an instant. Ayaka also gives Honoka books to study school subjects, because his grades are poor. After school when traveling on a bus, they are greeted by Chronoire Schwarz VI and her servant. She immobilizes Ayaka and stabs Honoka in the shoulder, to hurt Ayaka and show him how damage transfer works. She gives Honoka a toffee, which can unlock his white power. Ayaka regains strength and attacks Chronoire but she escapes. Honoka takes Ayaka to treat her wounds. Later Honoka begins to learn magic.

During training, Honoka sees some thugs bullying a girl. He tries to help her even after Ayaka asks him not to meddle with normal civilian affairs. But he crashes down from his broom. When thugs try to hurt him Ayaka uses her power and helps him.  She informs him that she is not intruding and that these "... bullies ..." are instead actual Tower Witches, laying a trap for him; which allows her to intervene.

Ayaka is always shown to be traveling on the same bus and sitting beside him in his class. Their cleaning duty is also at the same time. It is unknown to him that Ayaka is protecting him from other tower witches prior to the revelation of witches. Since Ayaka is always surrounded by her fans, he has always wished to get a new seating arrangement.

After he gets to know about witches and Ayaka becomes willing to be with him openly, the hate from her fans increases and he is hesitant to be with Ayaka. He is very protective of her and doesn't want to see her get hurt. Honoka believes in her but wishes that she tells him the truth about her. Later he asks her to teach him magic so that when the time comes he can protect himself.

Later in the series, it is revealed that their mothers had arranged things in the past so that they will get married in the future. It is also hinted that both of them know each other from an earlier time, but all that remains is a feeling of wanting to be around each other.

It is later revealed that they've first met in the Kagari Clan's Main Estate when they were around 12 years old. At that time Ayaka had been secretly chained to the wall in a confined room for a very long time because her biological mother Kayou Kagari had, in order to deepen the lineage of flames of the Kagari clan, experimented on her and used her as the vessel of Evermillion. In that room, she met Honoka for the first time who was visiting the estate with Kazane (at that time he was traveling with her as her assistant and disciple).

With the help of his teacher, Honoka freed her, but she had been mortally wounded after encountering Kayou who tried to erase Ayaka's existence in order to accomplish her goal. He took her away and, for the sake of resurrecting her, entered a contract with Evermillion and thus became her new vessel.

After being resurrected, Ayaka had lost all memories of the recent events (including her memories of Honoka) and secluded herself in the confined room. After Honoka was finally able to take her out of that room, he showed her with magic a scenery of his favorite place he went to during his travel with Kazane. There, he encouraged Ayaka that soon her life won't be as gloomy and lonely anymore and she would take back the things she'd lost in that room. Right after that, Ayaka realized that it was Honoka who rescued her and broke down in tears.

Kasumi is the younger sister of Honoka. They are very close to each other. It is said by their mother that every 2 days, she will sleep and bathe with him, and every weekend, she asks her brother to get the bonuses in her game. She believes that it is her right as a younger sister.

As a studio witch, it is her duty to protect Honoka from other witches at home and on holidays. She is very jealous of Ayaka due to the time and manner in which Ayaka spends time with her brother.

Evermillion is sealed inside Honoka's body. When the first seal was broken she appeared in front of Honoka and asked him to believe in Ayaka's strength more and helped him in the fight against Medusa.

Later on in the anime, it becomes clear that Evermillion is quite far from being inprisoned within Honoka Takamiya. The relationship is more in keeping with Honoka being an exit for Evermillion from Her own Universe, into ours; like a gateway. It is also increasingly clear Evermillion only comes here when there is some event that captures her interest.

She is clearly entertained by events that occupy the time of Honoka and Ayaka, and there are strong hints that she has made deals and arrangements with both of them.

It is later revealed that Evermillion used to be sealed in Ayaka. But in order to use her power to resurrect Ayaka, Honoka entered a contract with Evermillion and thus became her new vessel.

She is the chairwoman of Tougetsu Academy and commander of workshop witches. It is shown (in the manga) that Honoka has known Kazane in his childhood, and he has no memory of her. It is said that she is the reason why Honoka can keep a peaceful life.

It is later shown that he used to travel with her as her disciple and assistant when he was a kid, prior to his memory loss.

Komachi is the mother of Honoka. According to Honoka, when she is stressed, she first resorts to crying and then resorts to immobilizing depression. Whenever it happens, Honoka is the one to take care of his mother.

Honoka is a small framed student. His grades are poor and he has almost no stamina. He is physically weak and no real talent in anything. Later it is revealed that the seals placed on him to keep Evermillion in suppressed his own natural talents. After the seals are broken his grades and physical ability all skyrocket.

Since Evermillion is sealed inside him, Honoka has a vast amount of magic power that is sufficient to maintain and repair entire city damages caused by other witches. Also, Ayaka Kagari has been using his magic power through the damage transfer technique. It is also shown that he can switch places with Ayaka using this power. As a normal mage, he has shown that he is capable of using a broom for flying.

It is also implied that Evermillion powers was so powerful that she could recover the destroyed Tougetsu City, and she could boost Honoka's intelligence and magic. This was because of three out of five seals are broken within Honoka's body.[1] 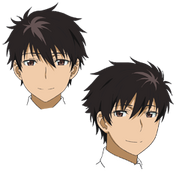 Retrieved from "https://witch-craft-works.fandom.com/wiki/Honoka_Takamiya?oldid=7367"
Community content is available under CC-BY-SA unless otherwise noted.